The Ballhaus Berlin was born in “Feuerland” (the burning land), as locals called the Chausseestraße in the “Gründerzeit”. It was then a stretch of factories characterised by blazing smokestacks, electric sparks and the thundering of hammers, of shady poorhouses, cemeteries and lowly housing estates. Later on, Prussian barracks and Berlin’s typical “Mietskasernen” (tenements/rental barracks) took over. And, of course, the Ballhaus Berlin, which got its start in 1905 as an inn with a coffee garden called “Zum Alten Baden”, belonging to the “Chausseepalast” at Chausseestraße 102. Renamed “Schwankes Festsäle”, it survived the chaotic times of war and revolution and entered Berlin’s heyday of amusement temples and “Pläsierkasernen” (amusement barracks) in the late 1920s, a time now featured in popular TV formats such as “Babylon Berlin”. The Chausseestraße had, by then, transformed from a poorhouse into the city’s northern centre - a lively business district during the day and an entertainment mile for all and everyone later on. Until the war ended the fun. 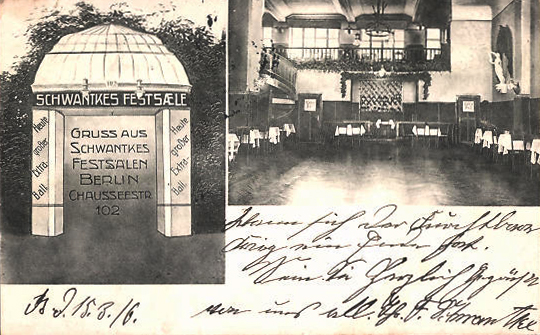 The ballroom survived and reopened in 1949 as “Behrens Casino”, which held an almost daily event called “Der gemütliche Altdeutsche Ball” until it became property of the people’s state in 1975. Restored and renamed “Ballhaus Berlin”, it then experienced golden days managed by the Gottschlichs. Couples were dancing under a disco ball, people flirted via tablephones, people enjoyed dances with ladies’ choice, sparkling wine and whiskey cola, resulting in an annual turnover of 1 million “Ostmark” (East German Marks). But alas, revenues started to dwindle after the reunification. The current Ballhaus team, enchanted by the charm of the place, took over in 2014. The idea of preserving a century-old tradition by taking it on a journey into the future came almost instantly. And indeed, a visitor from the past would certainly recognise the carefully restored rooms - the balcony and the spiral staircase, the lights and the tablephones, the bar and the disco ball - as these are reminders of Ballhaus history. Sometimes, joyful echos of the past flutter around the establishment, sporting “Zwicker” (Pince-Nez), Charleston outfits, ”Kreissägen” (boaters) or “Wasserwellen” (perms, similar to finger waves). We do our best to make them feel right at home. 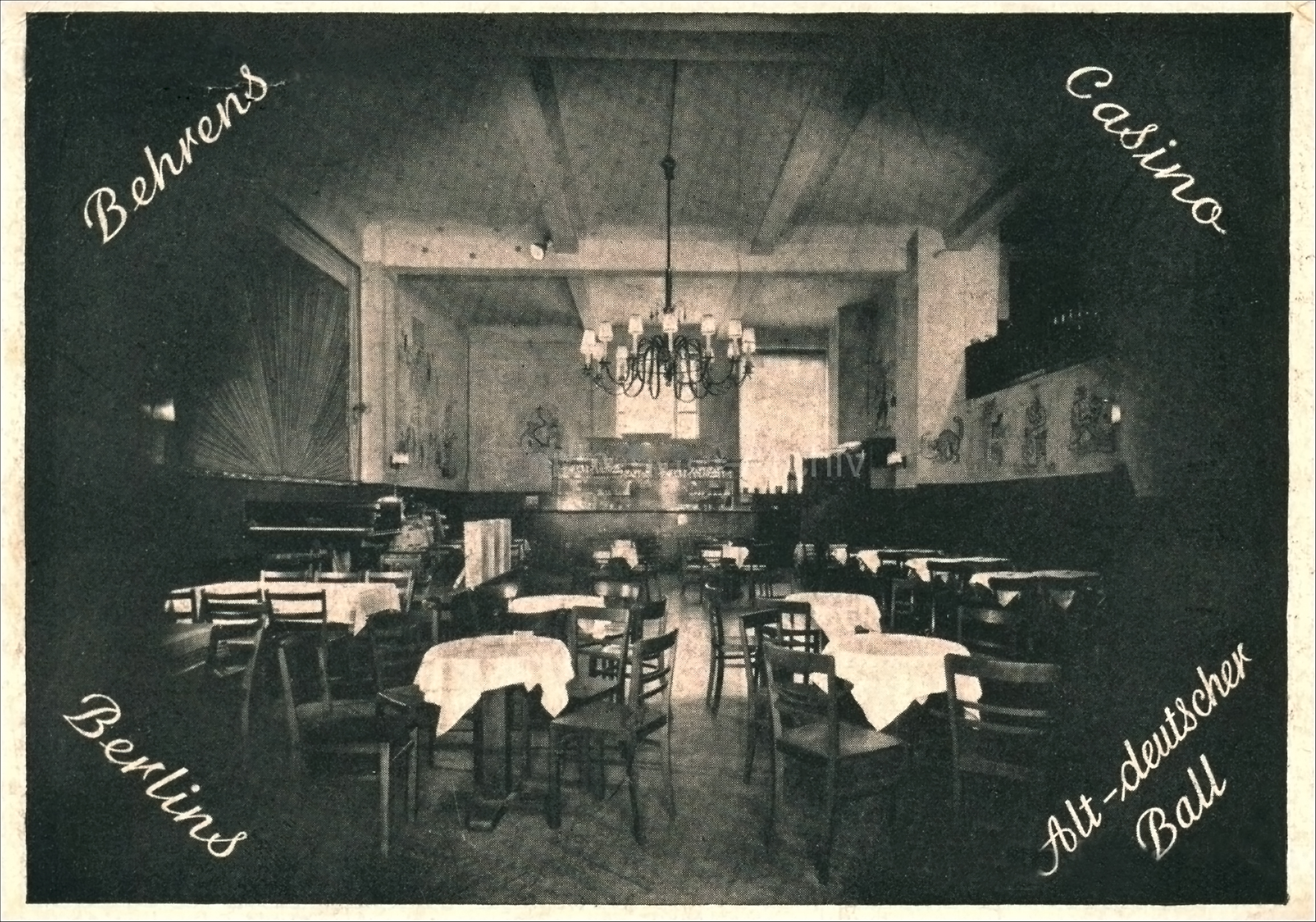 The Bierstube Alt Berlin is now two kilometres away from its original site in the Münzstraße 23 where, during the Weimar days, street prostitutes offered their services, earning the establishment the nickname “Zu den 3 Ritzen” (”Bar of the 3 Slits”, you can guess the intended meaning) and attracting a colourful clientele of often shady night owls. The Alt Berlin, originally opened in 1893, survived the bombing nights of World War II and the subsequent pillaging. During the GDR, the married couple Heinz and Inge ran the bar from 1960 onwards. It quickly became one of the hotspots of East Berlin‘s nightlife. Here, Berthold Brecht, the stars and starlets of the Friedrichstadtpalast, and many self-declared celebrities gathered to drink the nights away.The reputation of the place survived the fall of the Wall, and members of the Berlin scene, tourists, artists and Berliners-by-choice like David Bowie and Quentin Tarantino flocked here to have a (or, more often, many) “sip at Heinz and Inge‘s” and to discover their love for pickled eggs and “Bouletten” (meat patties). After Heinz’s death in 2010, Inge transferred the bar to Thilo Link, hailing from Baden. Although the bar continued to boom, 2014 marked its demise - at least at the premises at Münzstraße 23. Some investor had other plans for the centrally located spot. Old regulars rescued chairs, tables, wall panels and other fixings from the wrecking ball, and in 2016, the Ballhaus team installed the furniture and the panels, together with the old charm and the good spirit of the original place, in the Chausseestraße 102, where two inconspicuous former storerooms became the new Alt Berlin. After the reopening on May 27, 2016, the establishment regained its fame. 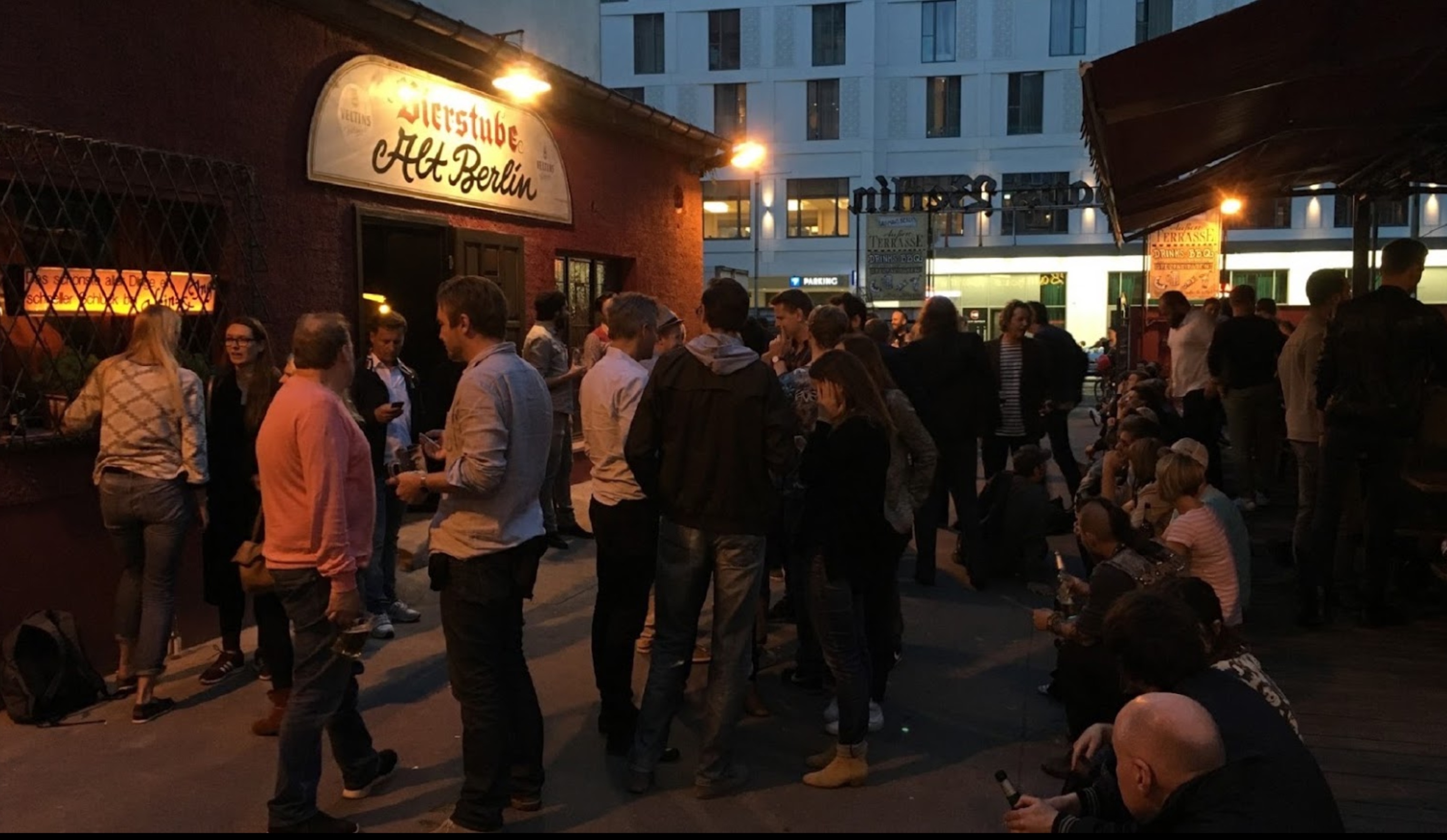 The Alt Berlin is, again, a popular place, receiving thirsty regulars, lovers of the 20ies and curious visitors from all over the world. Even William “Captain Kirk” Shattner had himself beamed in from Montreal

Founded in 1997, the Hostel Ballhaus Berlin is not only one of the oldest hostels in Germany but also one of the most beautiful. The building, now welcoming guests from all around the world, was the home of a flourishing company withover 100 employees from 1912 onwards. Here, Berlin-born Georg Albert Fuch s(1883-1951) headed the Schmidt & Fuchs GmbH, which manufactured dental equipment and instruments as well as hydraulic furniture for international clients. Fuchs became a wealthy and respected man, but the wartime economy and the bombings that eradicated the front building, the former home of the Fuchs family, brought the business to a standstill in the 1940s. 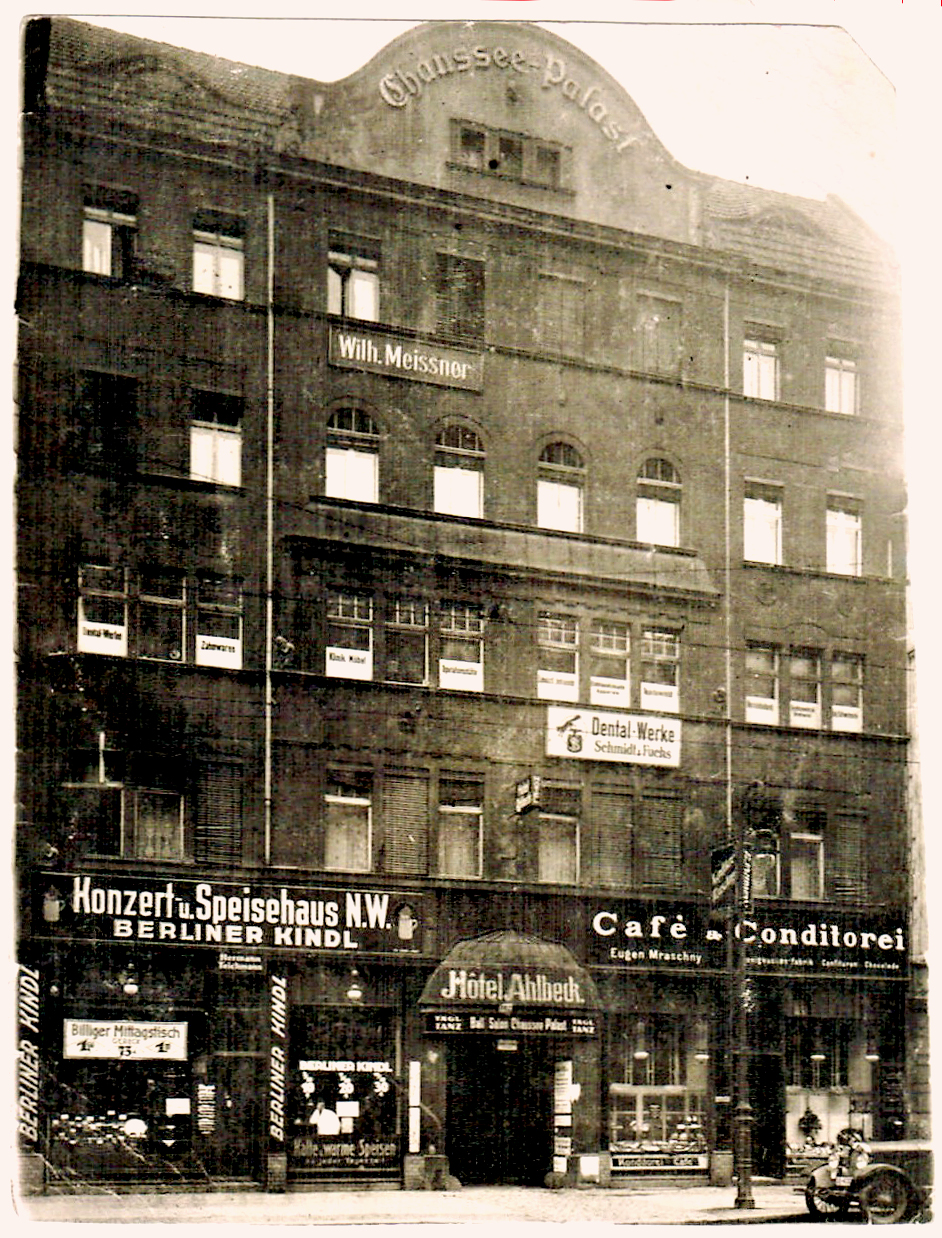 After Georg Fuchs’ death, his wife Edith continued the business as a shop for dental products. However, the Berlin Wall and the economic conditions in the GDR finally led to the closure of the company. From 1951 to 2009, the second floor housed a parish left homeless by the war along with a meeting place for Russian-Germans. Even today, the facade with its green and white glazed bricks, the wide staircases and the long corridors remind visitors of the turbulent past of the building. The modern interior design and works by contemporary artists create a reference to the present. Artworks by Jim Avignon, Ella Guru, Kai Stuth, Steffen Seeger, Ellen von Unwerth and El Bocho await you.

Although the Kaffeestube Alt Berlin only opened on May 27, 2018, the local tradition of serving coffee dates back to the Wilhelminian era. Around 1900, the “Café und Conditorei Eugen Mraschny” opened next to an archway in the Chausseestraße 102. Located in the basement of the Hotel Albeck and right next to a “Konzert-und Speisehaus” (a concert house with restaurant), business must have boomed right up to the war. After all, visiting a coffee house has been a classic “prelude to a pleasant evening” ever since the twenties. It wasn’t until a bomb hit the front building that Eugen Mraschny moved his establishment to the Chausseestraße 32. There, various leaseholders kept the café alive. 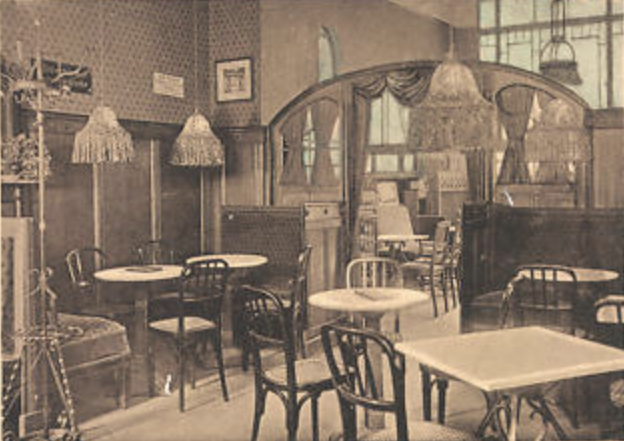 The location has long hosted beer gardens, the first one being the “Konzert-undSpeisehaus” once located in the front building of Chausseestraße 102. But the area wasn’t always as quiet and idyllic as one might imagine sitting in the courtyard and beer garden of the Ballhaus on a mild summer day. On the contrary. In the 1920s, the delivery vans of the Schmidt & Fuchs factory frequented the courtyard, loaded with hydraulic chairs, dentist’s lamps and operating tables, passing employees hard at work where today tables, terrace furniture and fragments of the Berlin Wall invite guests to relax. Until 1918, the footfalls of soldiers coming from the neighbouring Maikäferkaserne often disturbed the peace and quiet. And as soon as the daylight receded, early nightowls headed towards “Schwankes Festsäle” in the rear building, which they would often not leave until dawn, emerging into the first light, cajoling and laughing. Add to all this the infamous twilight of the Berlin backyards, and you get the picture - the four-storey front building separated the now open courtyard from the life and the light of the street. 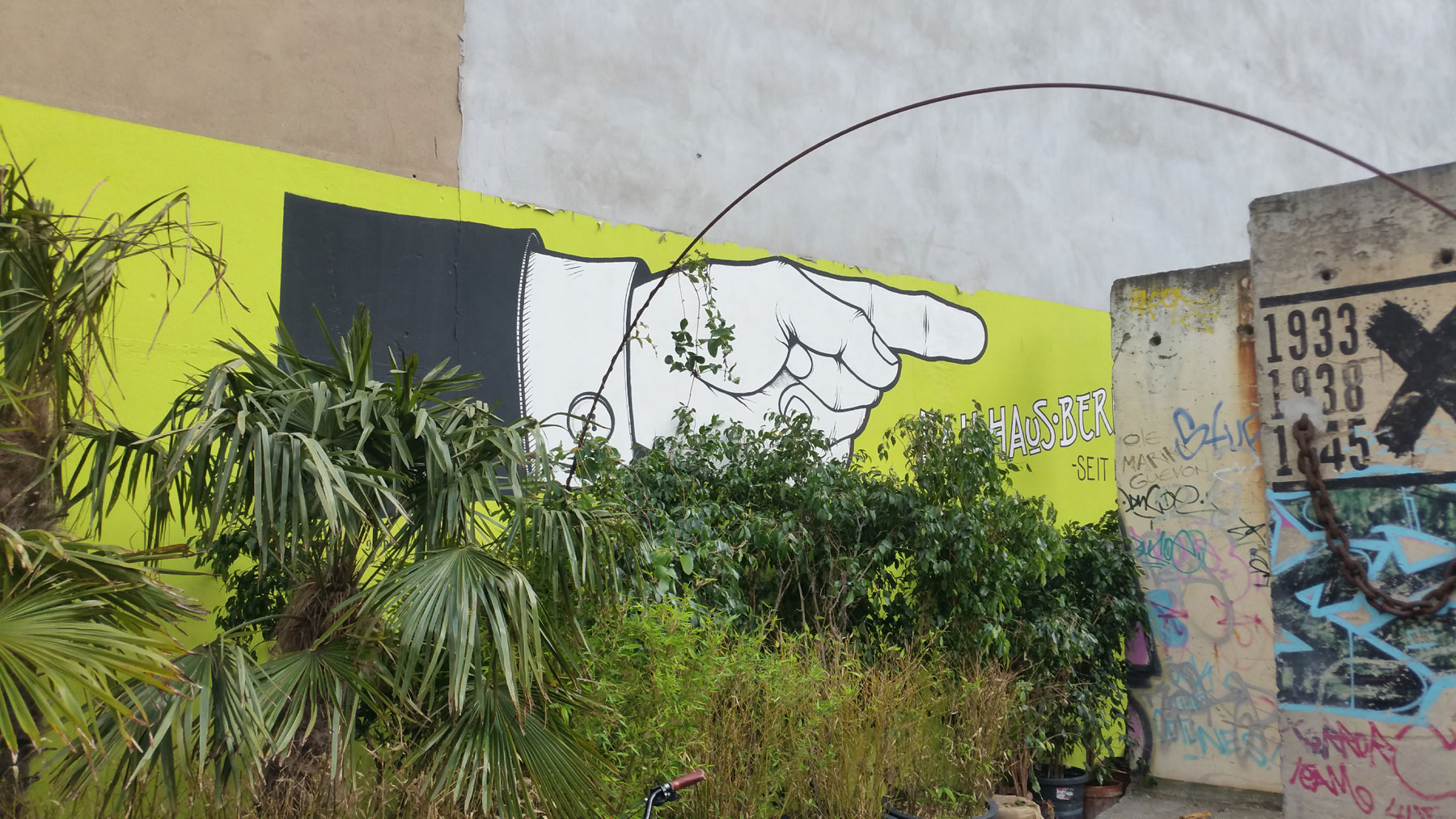 In the last days of the Second World War, allied bombs reduced the front house, home to various establishments and the apartment of factory owner Fuchs, to rubble. Today, the beer garden of the Ballhaus is the last remaining free area in the stretch of buildings that make up the Chausseestraße.